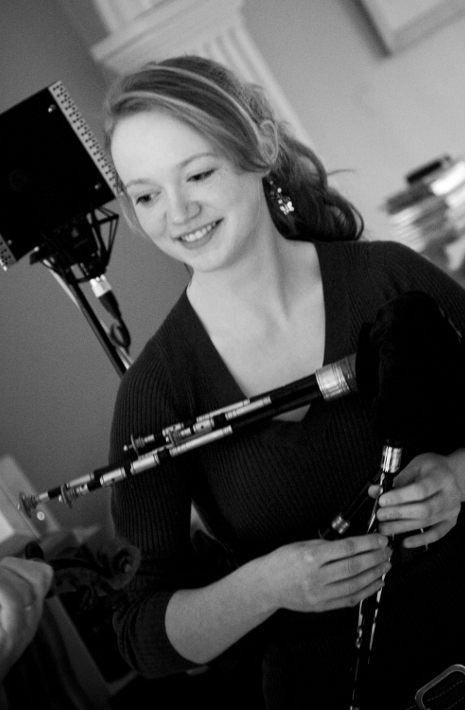 In 2009 Alice was BBC Radio 2’s Young Folk Musician of the Year finalist with harpist, Emily Hoile. Following this, they performed together at folk festivals throughout the country, including the Lammermuir Music Festival, the National Forest Folk Festival, and appeared live on BBC Radio 3’s ’In Tune’. Alice was a member of The Sage Gateshead’s Folkestra led by Kathryn Tickell with whom she performed in Madrid and at the BBC Folk Prom at the Royal Albert Hall. In 2013, she was really pleased to be the soloist for a miniture tour with the Royal Northern Sinfonia String Quartet. Later in 2013 she toured with two County Durham theatre companies performing extensively as solo musician on keyboard and pipes. In the summer of 2014, Alice represented British Music with the Windy Gyle Band at the International Bagpipe Festival in the Czech Republic. With the Windy Gyle Band, she has also performed at the Whitby Folk-Week Festival for six years, and has recorded two albums and an EP. She was pleased to contribute two tracks to the Northumbrian Pipers Society most recent combination albulm, The Omnibus, 2014. This year, Alice has twice performed Sir Peter Maxwell Davies' chamber concerto Kettletoft Inn, with the alumni of the National Youth Orchestra of Scotland (NYOS Futures) and with Durham University Orchestra Soceity (DUOS).

Alice graduated from the University of York in 2014 with a first class BA honours degree in academic music. She is currently studying Musicology at Durham University with a focus on British art music of the 20th Century. Alongside her academic studies, Alice is Piper to the Mayor of Berwick and she privately tutors piano, Northumbrian Smallpipes and clarinet. Alice is employed by the Sage Gateshead to lead beginner and advanced Folkworks Tuesdays 'Adult Leaning' classes.